No game today so a sleep in for the boys and some R&R in Gothia town centre.

The coaches went off to see Right to Dream Academy play in the quarter finals and the boys had a look around the rest of the games and tournament area, purchasing some souvenirs of the 2016 tournament.

A quick excursion on the trams, one the wrong way before heading back in the other direction the boys supported some former teammates in their quarter finals on the opposite side of town. Back on the trams and a bus back to the school after a day out in the sun the boys packed their stuff for the next day and chilled for the rest of the night.

The Trip finished up with a friendly match with an American team called FC Connecticut, which Coach Nuno organized through one of our player’s friends.

It was a fun run around in the sun for the boys and we even got one of junior players Chris Cruz to play few minutes. He was over travelling with his parents and supporting his older brother Sebastian, it must have been a good omen because Sebastian scored the winning goal for the Academy and the boys went away with a 1-0 win.

Back to the school after the win, the boys got their stuff ready and it was on to the bus for the trip to the airport and the flight home.

Overall it was a fun tournament for everyone with a lot of lessons learned not only by the players but the coaches as well. The results weren’t what we hoped for, but realistically the age differences did play a large part in the outcomes. When you compare the growth of a 13-year-old to that or a 15 or even in some cases 16-year-old (each team was allowed to have 2 players one year older than the age group they were playing in) it can bring a large advantage to the opposition both in speed and physicality.

The Coaches were proud of the boys, they held in there and still gave it their all, may times showing glimpses of what they were capable of and controlling the game well. It brings a lot of good experience, for many of them it will be tough to take because of their competitive spirit, but out of it we hope they take the lesson of before you learn how to win you have to know how to lose and lose with respect to your opposition their fans and have the dignity to walk off the pitch holding your head high.

For now, it is in to the summer break and a chance for the boys to relax, have time off football and have fun doing some other sports before the 2016/2017 pre-season starts in the middle of August. 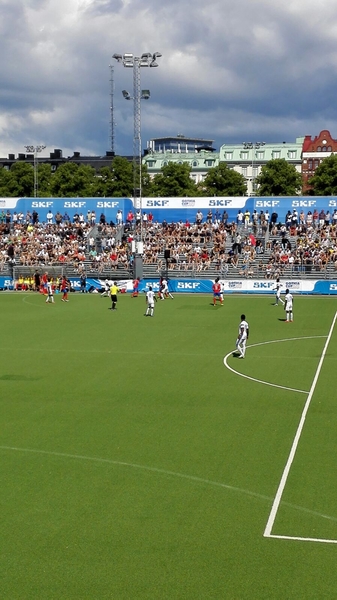